On Saturday, July 13th, in the shrine of Our Lady of La Salette in Dębowiec ended 26 International La Salette Youth Meeting.
The meeting gathered more than 2650 participants from Poland, Czech Republic and Slovakia. For six days under the slogan "Credible and hungry of faith" youth looked for answers to questions concerning with faith and Christian life in the modern world.
Each day young people participated in the Eucharist, they prayed together, listened to invited christian speakers and played with the christian rock bands.
Last but the most important accent of the meeting was the Eucharist, presided by the Fr. Roman Grądalski, M.S. who is custodian of the shrine in Dębowiec. In homily he urged the youth to wipe the tears of Our Lady of La Salette by good life and conversion. He also talked about the miracles who taking place in the sanctuary of Dębowiec.
The responsable for the meeting were Fr. Maciej Kucharzyk, M.S., Fr. Piotr Szweda, M.S. and Fr. Wieslaw Węgrzyn M.S.
Meetings in Dębowiec are very important elements of the pastoral work of La Salette Fathers with young people. Many young people started a new life with God after these meetings. Some of them discovered his vocation to married life, priesthood or religious life just in Dębowiec.
(gz)

(from RECONCILIATION AND PENANCE for reflection)

2. These divisions are seen in the relationships between individuals and groups, and also at the level of larger groups: nations against nations and blocs of opposing countries in a headlong quest for domination. At the root of this alienation it is not hard to discern conflicts which, instead of being resolved through dialogue, grow more acute in confrontation and opposition.
Careful observers, studying the elements that cause division, discover reasons of the most widely differing kinds: from the growing disproportion between groups, social classes and-countries, to ideological rivalries that are far from dead; from the opposition between economic interests to political polarization; from tribal differences to discrimination for social and religious reasons. Moreover, certain facts that are obvious to all constitute as it were the pitiful face of the division of which they are the fruit and demonstrate its seriousness in an inescapably concrete way. Among the many other painful social phenomena of our times one can noted.
• The trampling upon the basic rights of the human person, the first of these being the right to life and to a worthy quality of life, which is all the more scandalous in that it coexists with a rhetoric never before known on these same rights.
• Hidden attacks and pressures against the freedom of individuals and groups, not excluding the freedom which is most offended against and threatened: the freedom to have, profess and practice one's own faith.
• The various forms of discrimination: racial, cultural, religious, etc.
• Violence and terrorism.
• The use of torture and unjust and unlawful methods of repression.
• The stockpiling of conventional or atomic weapons, the arms race with the spending on military purposes of sums which could be used to alleviate the undeserved misery of peoples that are socially and economically depressed.
• An unfair distribution of the world's resources and of the assets of civilization, which reaches its highest point in a type of social organization whereby the distance between the human conditions of the rich and the poor becomes ever greater.(2) The overwhelming power of this division makes the world in which we live a world shattered(3) to its very foundations.
Moreover, the church-without identifying herself with the world or being of the world-is in the world and is engaged in dialogue with the world.(4) It is therefore not surprising if one notices in the structure of the church herself repercussions and signs of the division affecting human society. Over and above the divisions between the Christian communions that have afflicted her for centuries, the church today is experiencing within herself sporadic divisions among her own members, divisions caused by differing views or options in the doctrinal and pastoral field.(5) These divisions too can at times seem incurable.
However disturbing these divisions may seem at first sight, it is only by a careful examination that one can detect their root: It is to be found in a wound in man's inmost self. In the light of faith we call it sin: beginning with original sin, which all of us bear from birth as an inheritance from our first parents, to the sin which each one of us commits when we abuse our own freedom.
Published in JUSTICE AND PEACE (EN)
Read more...
Wednesday, 17 July 2013 13:26

Justice and Peace in SVD (example) 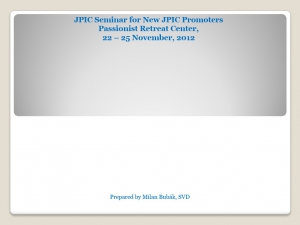 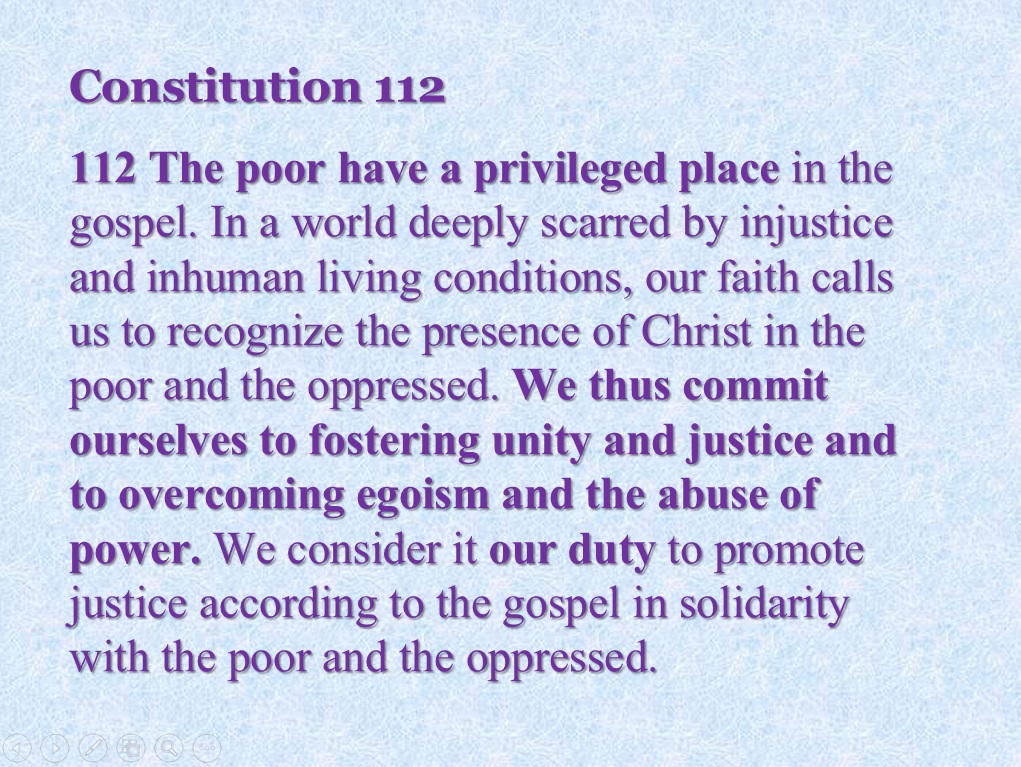 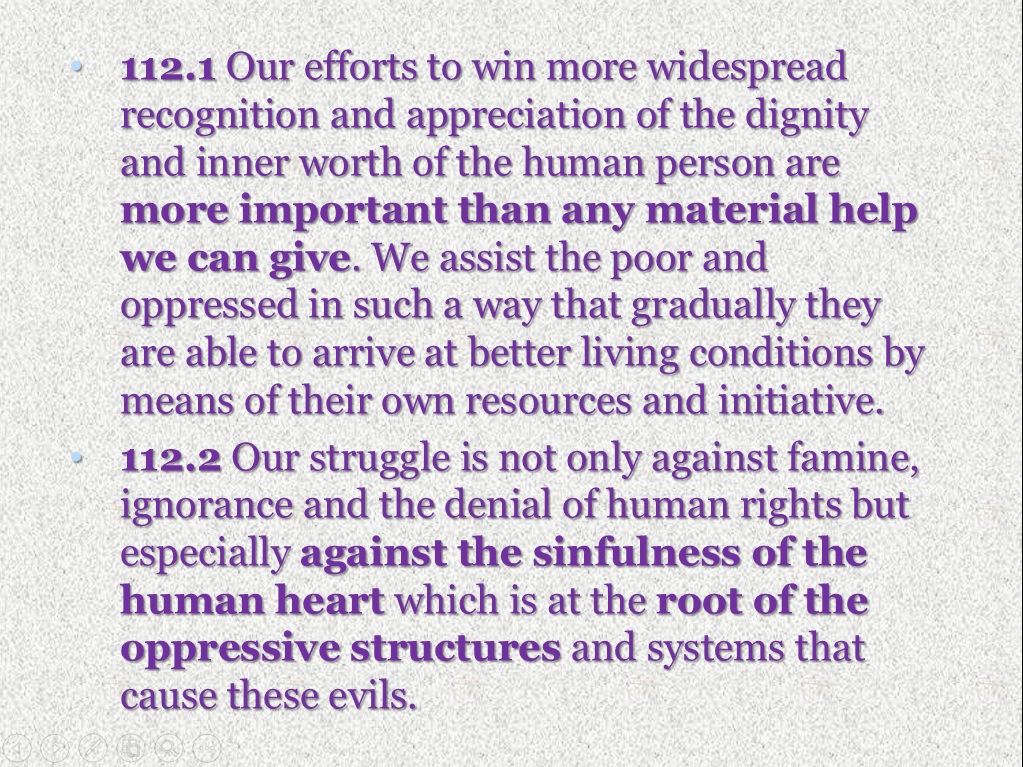 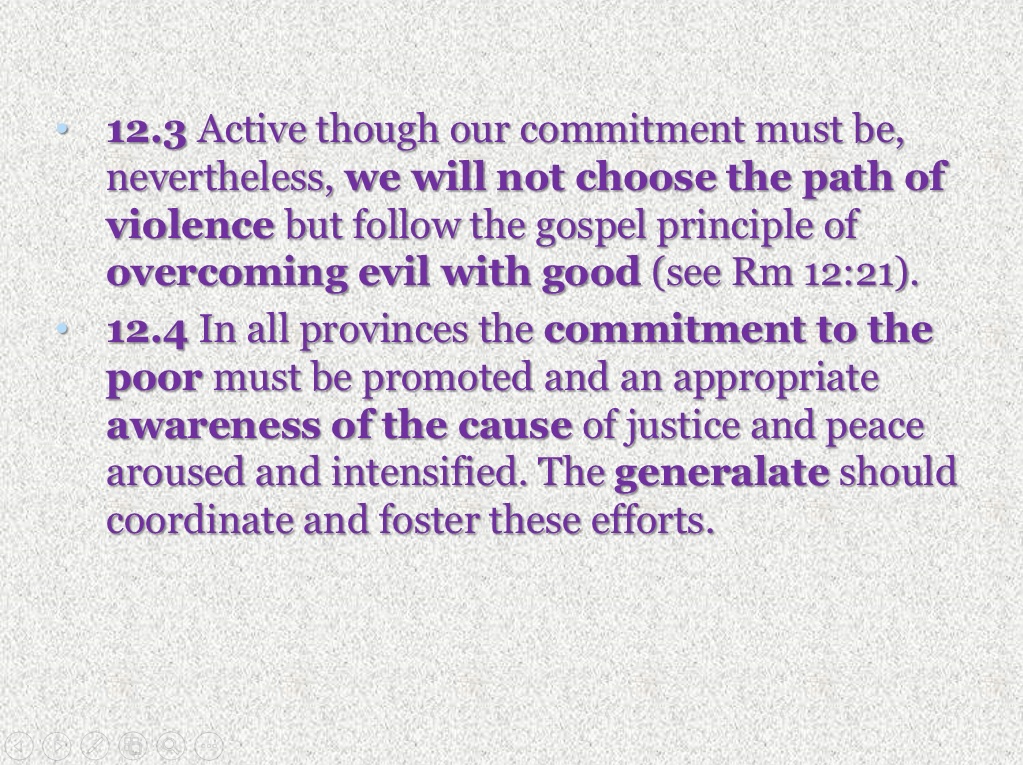 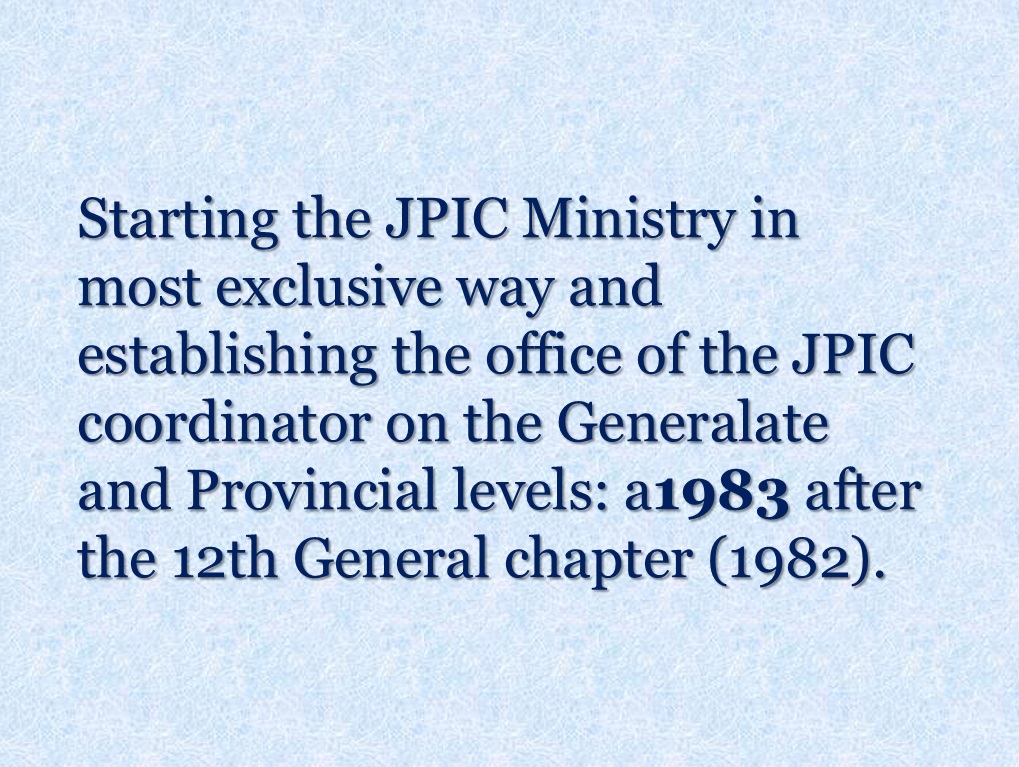 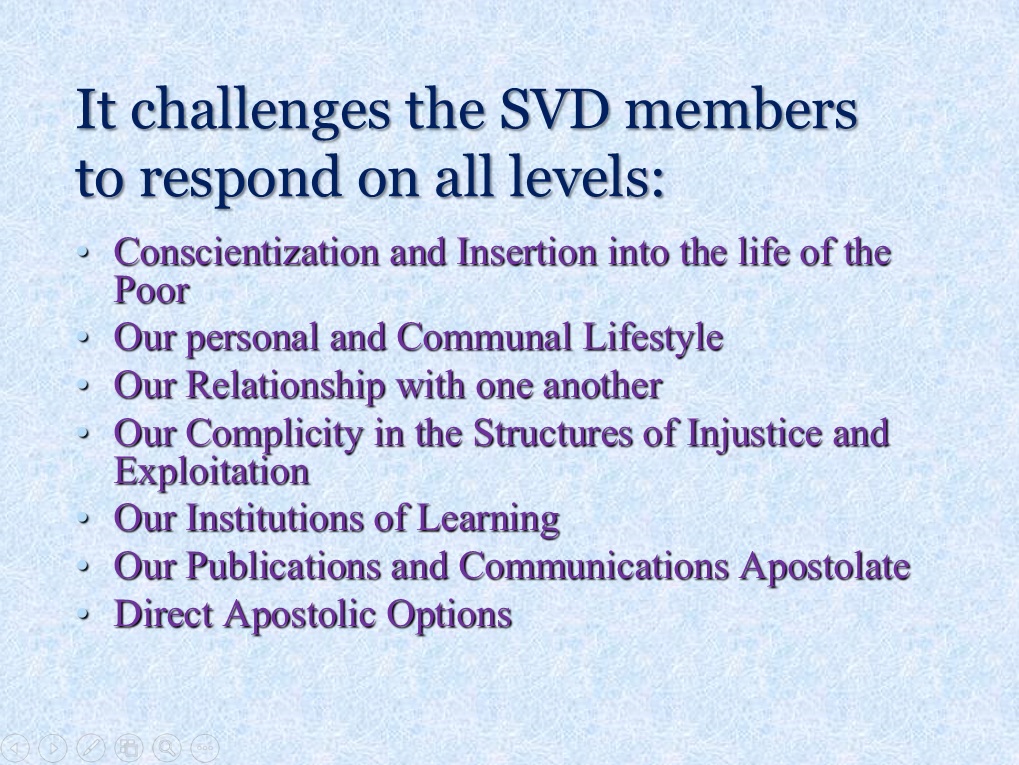 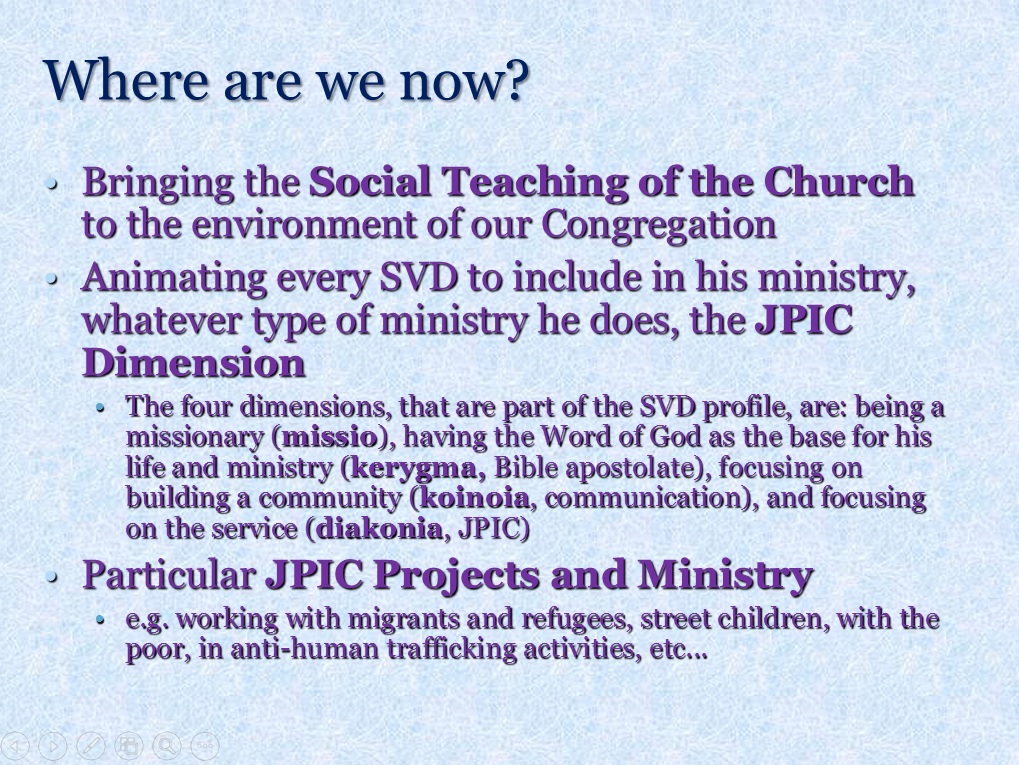 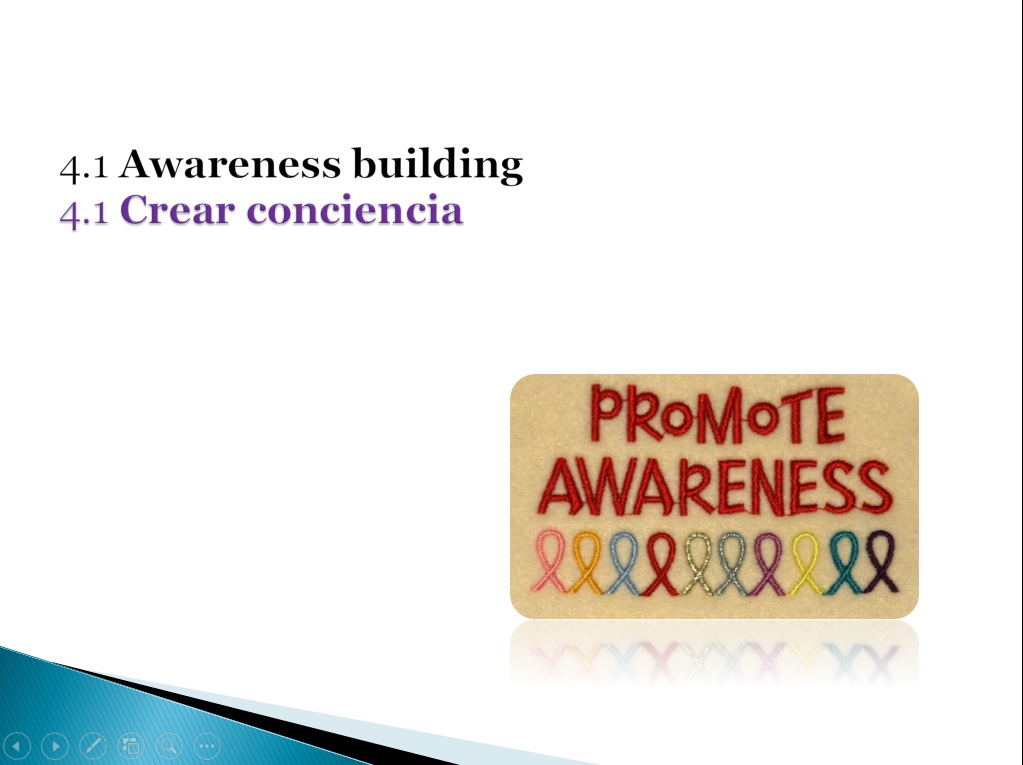 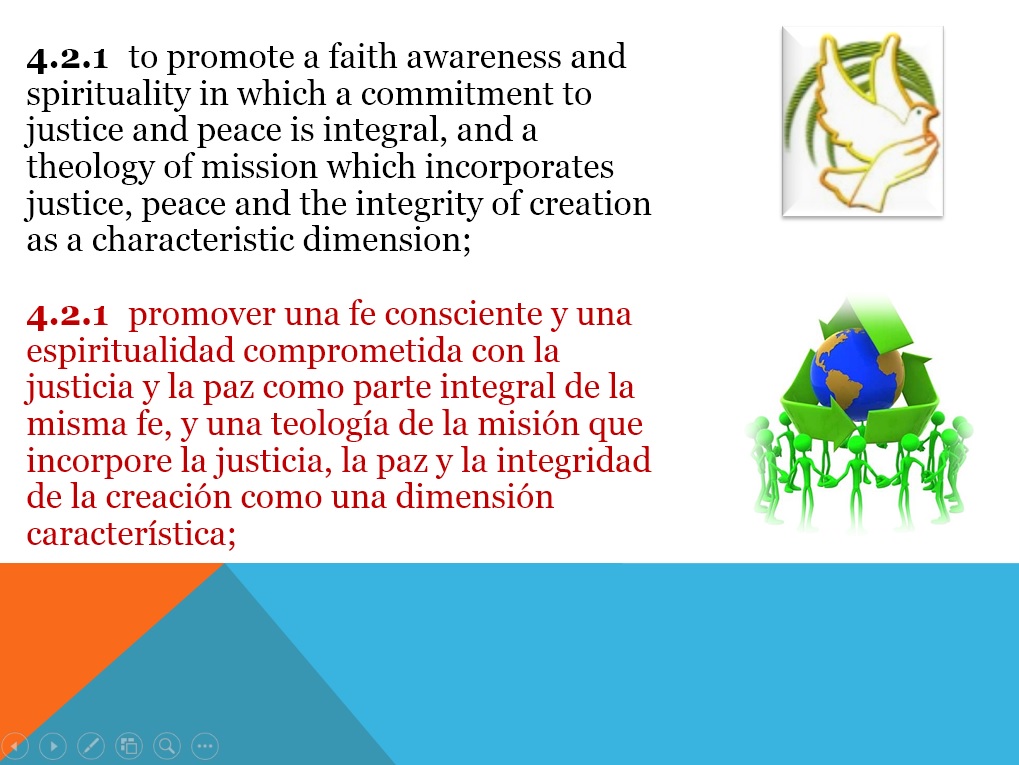 There is a unanimous agreement today among all theologians and exegetes that the main topic and the central message of Jesus was the Kingdom of God. A brief look at the Gospels will immediately show that Jesus was driven ( so to speak) by a vision, which he expressed in the following words: AI came to throw fire on the earth and I want to see it burning (Luke 12:49). This vision contains two basic concepts or symbols. The first is the word Abba, the human expression, Jesus used for God whom he experiences so intensely that he called the Father's will his food. The second is the symbol: Kingdom of God which he defined as God's plan or vision for the whole of creation. Jesus himself used this >Kingdom' symbol 92 times. Most of his parables are about his vision of the Kingdom that is coming to earth with him. The phrase Kingdom of God, therefore, contains in a nut shell all he wanted to bring and to communicate. We could say: in order to bring us God's Kingdom he came down to earth, he became one of us so that we could share with him the life of God's Kingdom for ever.

His vision which Saint Paul called the the unfathomable mystery kept hidden through all the ages in God, the Creator of everything (Eph ff. 3:3-11), is to be conceived as both christo-centric and all embracing.

First, Christo-centric means: in view of Christ everything was created, everything will be re-created and everything will find it fulfillment in him. The incarnation is the starting point and the endpoint of creation: in the words of Saint Paul:

NOVENA - I HAVE AN IDEA

Our Holy Mother reminds us that we have our weaknesses, but we have examples of the strength of our Father God all around us, and we should appreciate it, not act to make it turn against us.
Published in BLOG (EN)
Read more...
Monday, 15 July 2013 10:37

From the poetry of the Lebanese cedars to that of the French Alps, Our Divine Father infuses His loving Grace into our hearts and souls. Thank you for sending your chosen one to us in this majestic setting. It is ever changing, yet everlasting. We live in the hope that we too, in our ever changing existence will someday join you in everlasting exaltation.
Published in BLOG (EN)
Read more...
Monday, 15 July 2013 10:36

Lord, you have taught us so much. You keep us steady when we entrust ourselves to those to whom you have given the grace of surgical healing. You fill us with faith in our scientists, doctors, nurses, ambulance drivers, computer technicians, dieticians and so many others. God our Divine Father through our faith in You we have faith in your creatures. We sustain ourselves with the grace of Faith that keeps us in trust of our brothers and sisters in the great communion of saints.
Published in BLOG (EN)
Read more...
Monday, 15 July 2013 10:34

It took nineteen centuries to make her cry. At La Salette, she broke down. Mary, dear mother, we are here to help. Teach us how to do it. We are here for you. Fill our hearts with the courage to help you stand again with the same courage that you showed on Calvary.
Published in BLOG (EN)
Read more...
Monday, 15 July 2013 10:27

5th day of the Novena

When we forget the Rock, bad things happen. We can fill our lives with exotic belongings, but without the Rock success does not visit us. Fortunately, our Rock is more than granite. Our living God finds ways and our neighbors to come to our and intercede for us, buying us a little more time and providing us with the care that we need to bear the fruit that is expected of us by the ONE who planted us.
Published in BLOG (EN)
Read more...