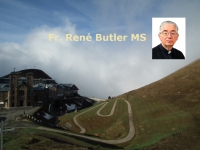 Called from Birth
(Birth of John the Baptist: Isaiah 49:1-6; Acts 13:22-26: Luke 1: 57-77, 80)
Elizabeth’s neighbors and relatives wondered what her child would be. Now we know his story. His role was to go before the Lord to prepare his ways. He was well aware of his unworthiness. He seems even to have passed through a moment when he shared the sentiment of God’s servant in Isaiah: “I thought I had toiled in vain, and for nothing, uselessly, spent my strength“ (cf. Matthew 11:2-6).
Mélanie Mathieu and Maximin Giraud were, we can say, called from birth to announce the event of La Salette. The later lives of both were largely unstable, partly because people around them thought they must be destined for a vocation in the Church. They were willing to try, but neither one succeeded.
From contemporary descriptions of Maximin, he might have been what is today called autistic, incapable of sitting still. He never did settle in any of the occupations he pursued and often found himself deeply in debt. He died in 1875, only 40 years old.
Mélanie was taciturn and excessively shy but, over time, there came a shift in her relation to the Apparition, as she herself became increasingly the center of attention. In later life she published writings describing her childhood as that of a mystic, in terms that have nothing in common with any of the early documents about the Apparition and its witnesses.
My purpose here is not to focus on the unworthiness of Mélanie and Maximin. That goes without saying. Like John the Baptist, through no merit of their own they were objects of God’s favor and plan.
Yes, we are all called to be saints. That doesn’t change who we are. The children’s flaws actually lent credibility to their account. Ignorant as they were, they were incapable of inventing such a story, much less such a message, and in a language they barely knew! But their simplicity, humility and constancy in telling the story made them more trustworthy still.
No one could have predicted what their lives would be after the Apparition. But now we know their story. At the heart of it we find an encounter with the divine, to which they were destined by God, and fidelity to the mission received, despite their faults. The Beautiful Lady’s witnesses are good models for us all.