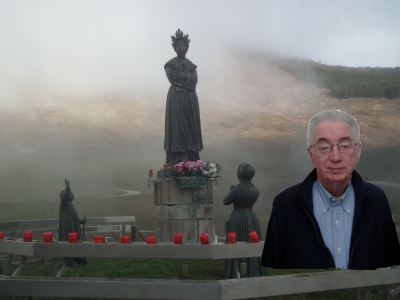 Epiphanies
(Epiphany: Isaiah 60:1-6; Ephesians 3:2-6; Matthew 2:1-12)
For Christians, the word Epiphany has a limited, specific meaning. If you look it up in a dictionary of Ancient Greek, you might be surprised to see how many meanings it has. Examples include: what something looks like; when something or someone comes into view; what is visible on the surface; the sensation created by someone. In short, something or someone is seen or noticed.
The Magi created a sensation when they arrived in Jerusalem. Before that, they saw a star come into view. They received an epiphany and then became one themselves when they appeared on the scene.
Another translation of the Greek word is simply Appearance, interchangeable with Apparition.
At La Salette, the bright globe of light the children first noticed revealed within itself a woman seated, her face in her hands, weeping. Thus begins the story of her epiphany, her Apparition. Mélanie and Maximin described what they saw. This created a sensation. We could paraphrase the words of the Gospel and say: The mayor was greatly troubled, and all the region around La Salette with him. And, like Herod, local authorities tried to hush everything up.
Epiphanies are not restricted to visual phenomena, however. Just as we say, “I see,” meaning “I understand,” there is more to an epiphany than meets the eye.
This is why we devote more attention to the message of the Beautiful Lady than to her appearance; why we study the history of the event, before and after September 19, 1846; why the lives of the two children matter; and why the Apparition is still an epiphany today.
Isaiah, as a prophet, experienced many epiphanies. St. Paul experienced one, on the Road to Damascus. As a result, both proclaimed the inclusion of the Gentiles in God’s plan of salvation: “Nations shall walk by your light;” “The Gentiles are coheirs… copartners in the promise in Christ Jesus.”
The Magi represented the Nations. They walked by the light of a star which changed their lives.
As long as La Salette remains an epiphany, it will have the power to change lives.