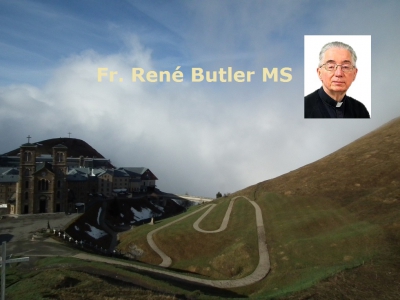 The first Ecumenical Council, held in 325 A.D., stated emphatically that Jesus was the Son of God, “God from God, Light from Light, true God from true God.” The Bishops who gathered at that Council summed up in that way the teaching they had received from their predecessors, based in turn on the preaching of the Apostles and the whole New Testament.

They reflected on texts such as we find in today’s Gospel. The voice from heaven says, “You are my beloved Son; with you I am well pleased.” This is only one of many passages that indicate the relation of Jesus to God as his Father.

The Mother of Jesus can therefore be called, according to another Council in 430 A.D., “Mother of God.”

At La Salette she directs our attention to her Son. Even before speaking a word, she shows him to us in the large, dazzlingly bright crucifix she wears on her breast. It bears repeating here that Mélanie and Maximin said that all the light that made up the Apparition seemed to flow from that crucifix. (One could almost say that, in this sense, the Beautiful Lady, too, was “light from Light.”)

But she speaks of her Son as well. “I shall be forced to let go the arm of my Son… Those who drive the carts cannot swear without throwing in my Son’s name.” All together, “my Son” occurs six times in her discourse. She doesn’t say “beloved,” but who could doubt it?

“My people” occurs three times. Again, “beloved” is not used, but who could doubt it?

A striking difference between the Gospel scene and the Apparition, is that the Father is “well pleased” with his beloved Son, whereas Mary came to tell us that her Divine Son was not well pleased with her people. She gave specific examples of things that “make the arm of my Son so heavy,” and described past and future consequences of such behavior.

But at the same time she offered simple, very basic means of remedying the situation. She did not wish to deprive us of hope.

She knew that our sinfulness does not mean we are not beloved. Why else would she have come?